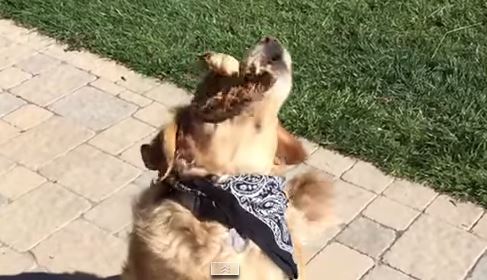 We would have given up after taking a steak to the face.

But Fritz, the dog who just can’t catch food, keeps on going.

The YouTube video shows him unable to snatch several other food items out of the air, including a donut, meatball, taco and a hot dog – though man, he comes close with that hot dog.

MORE: MDMA to be tested on terminally ill patients

It’s kind of brutal seeing a dog taking a full taco to the ear, but Fritz will not be denied, and eventually succeeds when he caught a single chip thrown by his owner.

‘We’ve compiled some of the highs and lows of Fritz’s quest to learn how to catch food,’ YouTuber Fritz Dog said.

There were definitely more lows than highs, which were punctuated with slow motion and a moving score from musician Evan Ball.

His human previously revealed that bizarrely, Fritz is better at catching smaller, healthier items – though he still mucks up this broccoli catch.

MORE: Man lost his phone in Chinese takeaway and found this video when he got it back