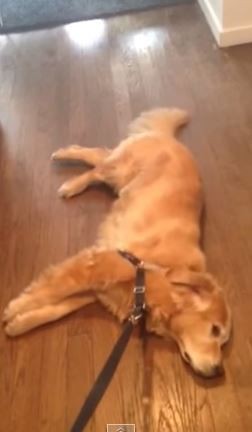 You only have to mutter the word ‘walkies’ to most dogs and they’ll be at the front door before you’ve even finished speaking.

But for this lazy golden retriever, there’s nothing worse than the prospect of a trip outside.

In the clip the owner is seen dragging the dog by the lead as it refuses to cave into his demands.

Although the video ends before we’re able to see who prevails in the battle between man and dog, the determined refusal of the animal to budge makes us think that the owner was probably forced to accept defeat.

MORE: Police discover 60 bodies at crematorium abandoned a year ago