2014 was a remarkable year for the bizarre and disturbing. Take, for example Jasmine Tridevil, the three-breasted sensation that took the internet by storm, the horrific rise of the ‘Ebola zombie’ and the sad death of child star Macaulay Culkin.

And that’s not to mention the gargantuan crab spotted lurking off the coast of Whitstable, nor the fact the world was plunged into six days of terrifying darkness thanks to a solar storm.

Thankfully, none of these events actually occurred. Viral hoaxes are alive and well and we’ve had some powerful ones during these last 12 months. Here are ten of the best: 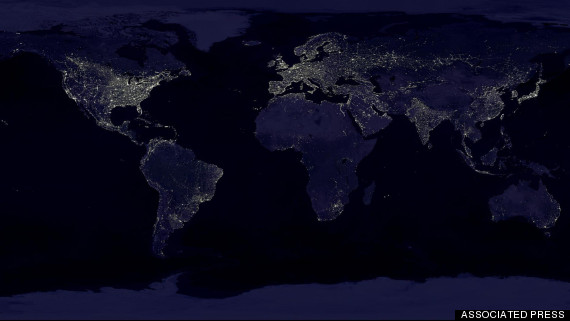 Turn out the lights: The world was set for six days of darkness if you believed Huzlers

In December a hoax peddled by satirical news site Huzlers claimed the world would experience a six day blackout.

Despite its dubious origins, the (false) listing of NASA administrator Charles Bolden as the source of the claim saw it quickly go viral, with concerned citizens spreading panic online. The blackout, Huzlers said, was “due to a solar storm, which will cause dust and space debris to become plentiful, and thus block 90% of sunlight.”

This wasn’t the first time that NASA has had to combat a worldwide blackout story – in 2012 a rumour surfaced that the Earth would be passing through a ‘Photon Belt’ causing the planet to be plunged into darkness. That didn’t happen either.

October saw a gruesome picture purporting to be that of a Liberian Ebola victim “risen from the dead” spread through worldwide social media networks like wildfire. 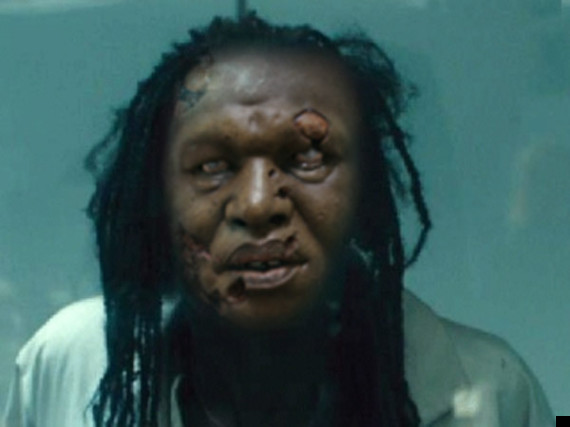 This image of a purported Ebola zombie victim went viral

The image was accompanied with the words: “For the first time in human history, confirmed footage of a man who scientists watched die from Ebola then only several hours later, regain life and rise from the dead.” (sic)

It cited Bible passage Isaiah 26:19-20: “Your dead shall live, their bodies shall rise.”

Warning of a possible zombie apocalypse, the article the image appeared in claimed the Liberian government has accused the USA of “creating Ebola as a bioweapon to be used in future wars.”

Needless to say, the image was a fake and was actually a Photoshopped screenshot from the zombie movie World War Z.

Liberia’s four million people have been the most severely hit by the worst outbreak of the Ebola virus in history, which has so far claimed over 4,000 deaths in the country alone.

It is thus perhaps unsurprising that the appetite for hope amidst the tragedy is so strong.

One of the more complex hoaxes of 2014 was a threat to release nude photos of the actress Emma Watson, in an attempt to bring down 4chan. 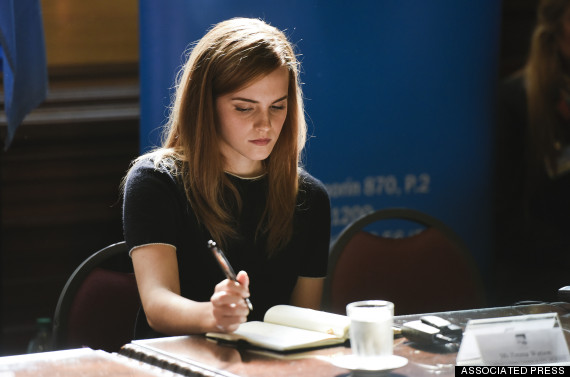 The threat was issued following Watson’s speech on rights for women at the UN, and did indeed originate on the anarchic message board 4chan, as originally reported.

“She makes stupid feminist speeches at UN, and now her nudes will be online,” said the messages.

A website sprang up moments later featuring a countdown clock, and threatening to release the pictures in five days.

The threat was linked by every major media organisation which reported it – including Huffington Post – to a wider leak of celebrity nude photos earlier this month, in which photos of actresses including Jennifer Lawrence were published across the internet.

At the 11th hour it emerged that viral marketing company Rantic Marketing was behind the hoax, with the aim of drawing attention to the illegal sharing of pictures by 4chan users.

September saw one of the most jaw-droppingly stupid ruses take off – one which apparently saw victims fall for the belief they could wirelessly charge their iPhones in the microwave using a new features in iOS 8 called WAVE.

I tried using the new IOS 8 feature WAVE where you can charge your phone with a microwave, does not work @Apple pic.twitter.com/IWsWnVboUl

The hoax was — according to Reddit — started by 4Chan as the latest in a string of iOS-based hoaxes that include a software update that would make your iPhone waterproof last year.

WAVE would apparently ‘interface with your device’s radio-baseband, allowing it to synchronize with microwave frequencies and use them to recharge your battery.’

It’s not known just how many people nuked their handsets, though judging by the images of charred iPhones floating around online it was a fair few…

Elusive graffiti artist Banksy’s cover was blown in September when he was unceremoniously arrested for vandalism, conspiracy, racketeering and counterfeiting. 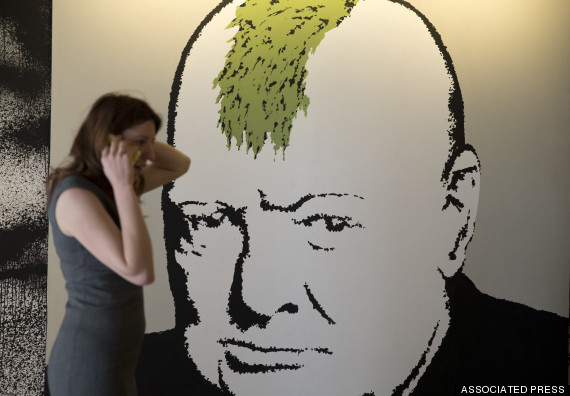 Well that’s what US website the National Report would have had you believe.The bogus story alleged the infamous street artist was arrested following a raid on his London studio.

It “outed” him as Paul Horner, a 34-year-old born in Liverpool and says he is being held “without” bail, along with four other, unnamed individuals.

Banksy’s publicist Jo Brooks confirmed to the Independent the tale is a hoax.

Indeed the quotes which accompany the piece date back to an identical spoof in February last year, which claimed Banksy had been arrested on the same charges and outed as, yep, Paul Horner.

So basically the internet is now recycling its own hoaxes. Lazy.

In January a satirical news site fooled the internet – and a national newspaper – into believing a giant squid had washed up on Californian shores.

According to Lightly Braised Turnip (surely all the clues you need right there?!), the colossal creature, which reportedly appeared in Santa Monica Bay, measured “a whopping 160 feet from head to tentacle tip”. 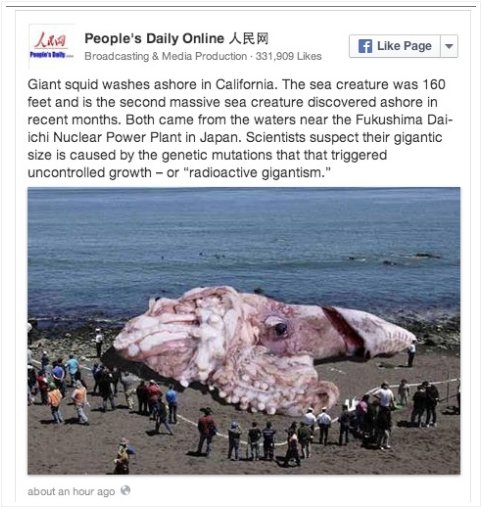 The report suggested that the creature had grown so big due to ‘radioactive gigantism’ — a genetic mutation triggered by the 2011 disaster at the Fukushima Dai-ichi Nuclear Power Plant.

Soon social media was alive with shares and retweets, prompting National Geographic to step in and remind us that the largest giant squid ever recorded measured in at 43feet.

It is also worth pointing out that Lightly Braised Turnip had also reported the hoax sighting of a rare oarfish that had grown to a freakish 100-foot length, as well as an exclusive interview with Santa Claus.

MSNBC broke the news, citing unconfirmed sources as claiming the actor had been found dead in his apartment after police responded to a “wellness check” requested by a family member.

The 34-year-old saw the funny side however, and put the rumours to rest when he shared a photo of himself on his band’s Instagram account mocking the news by recreating a scene from Weekend At Bernie’s, a 1989 comedy in which two guys pretend their murdered boss is still alive.

In late August the British government raised the threat level from international terrorism to the UK to severe.

Days later false rumours of an imminent attack on the London Underground began to circulate.

A message via text and messenger services said: “They [the police] think there’s a terror threat and that it will happen on the tubes tomorrow around the west end area.

“Every single police officer in the met has been called into work from 4am onwards, even people on holiday are being told to catch the next flight home. So don’t go travelling on tubes!! It’s better to be safe than sorry. Please share.”

Social media contains lots of rumours regarding threats to tube network tomorrow. There is no specific threat so keep calm & carry on. 1/2

Unlikely as it was that a terrorist cell would forewarn potential victims of an attack via Facebook or text, many were panicked into staying off the network that day.

Luckily, the police were on hand to quell the rumours, with Ch Supt Paul Brogden of the British Transport Police tweeting: “Social media contains lots of rumours regarding threats to tube network tomorrow. There is no specific threat so keep calm & carry on.”

In September it was with a healthy dose of scepticism that we brought you reports of a 21-year-old woman who allegedly had surgery to obtain a third breast.

The massage therapist from Tampa, Florida claimed to have paid $20,000 for the procedure in an attempt to secure herself a reality show on MTV. 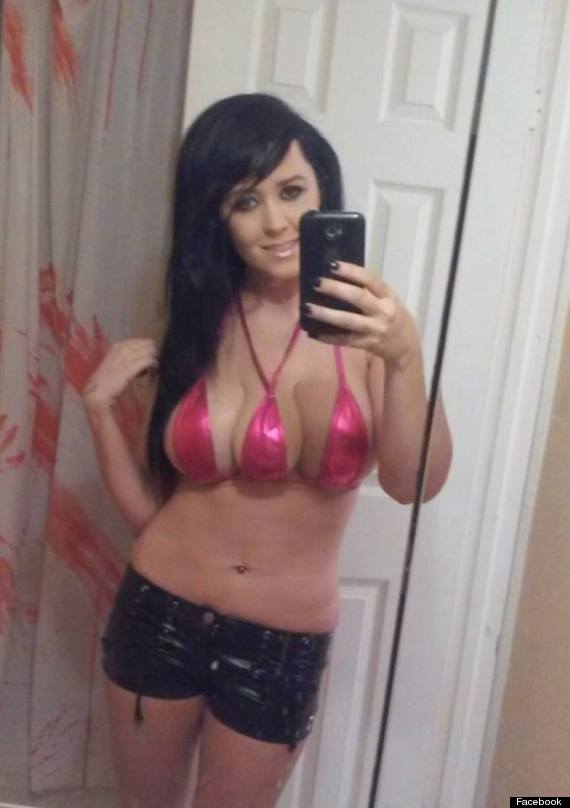 Using an obvious pseudonym, Jasmine Tridevil told an American radio station she had to contact more than 50 doctors before she found a surgeon willing to operate.

Tridevil’s dubious story was not helped by the fact that all the available images of her appear to have been taken by herself, with no third parties present, and that the footage she posted is decidedly grainy.

It later emerged Tridevil – real name Alisha J Hessler – had had several other brushes with viral fame – although sadly none which have managed to keep her in the public eye for much longer than a matter of weeks.

October saw the arrival of a giant sea monster to a sleepy seaside town famed for its oysters and cream teas.

A satellite image of a giant crab – thought to be 50ft across an rightly earning the moniker Crabzilla – surfaced on Weird Whitstable, an online journal dedicated to tall tales in the area. 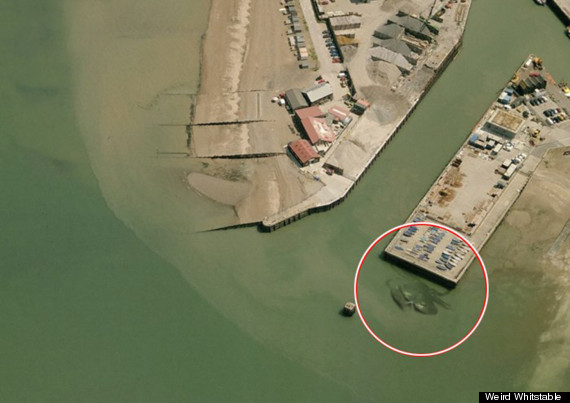 Blog curator Quinton Winter revealed to The Express he had encountered the decapod himself: “At first all I could see was some faint movement, then as it rose from the water I thought ‘that’s a funny looking bit of driftwood’.

“It had glazed blank eyes on stalks, swivelling wildly and it clearly was a massive crab with crushing claws.

“Before this incident I thought the aerial photo showed an odd-shaped sandbank. Now I know better.”

(Or else just became more proficient at Photoshop.)