Take a trip through the secondhand record shops of Soho and if you’re very lucky you’ll stumble across one of the rarest musical commodities: a Tubby Hayes record. Tubby would have been 80 this year if he’d paced his life more sedately. But that wasn’t his style. His style was to play it fast and loose, just like his tenor sax playing which helped wake up a slumbering post-war English music scene. His was a life lived so fast it couldn’t hope to attain longevity. And history had almost forgotten him, until now.

“It’s the classic story of crash and burn,” says Mark Baxter, the writer of the new documentary film Tubby Hayes: A Man In A Hurry which hopes to do for one of this country’s jazz greats what Searching For Sugar Man (2012) did for Sixto Rodriguez.

But the interesting aspect of this independently produced film is that it is the culmination of one fan’s two-year quest to resurrect the memory of an all but forgotten man. The film is proof positive that personal projects of cultural ambition can take off if enough energy, doggedness and acumen are invested in them; that and no small amount of elbow grease. On board with Baxter is videographer Lee Cogswell and BAFTA and Emmy Award-winning actor Martin Freeman (himself a fan of Hayes) who narrates the story.

With the film comprising 21 interviews with people who knew Tubby, including one with pop art king Peter Blake, Baxter had his work cut out as the organisational demands of the project grew exponentially. Film footage was shot, amassed and cut. “It’s a British culture piece. It’s Soho, London, the 1950s and ’60s. It’s a story that hasn’t been told properly before. Tubby passed the 11-plus to attend Rutlish School [in south west London], so he was an intelligent fella, but the music found him,” says Baxter. “It was a let-go lifestyle from the beginning with little or no responsibility informing his choices.”

Edward Brian “Tubby” Hayes was born in St Pancras in 1935, and with musical parents his fate was sealed, his only responsibility being to his inherited love of music. He was professional at 16 and played with the big dance bands of the day. “He wanted to be a serious jazz musician the way Charlie Parker was in the States. When he was sacked from Jack Parnell’s band he set up his own and started playing hard bop. He was noted by the music press of the day as a prodigy.”

Hayes ended up in Ronnie Scott’s band soon afterwards and was playing in the vanguard of British jazz in his early 20s. He was indeed in a great hurry to make his mark on the idiom as his ambition stretched to playing and recording in Europe and the US.

When he played a three-week stint Stateside, word had already got around that Tubby was a kid who meant business, so much so that Miles Davis turned up on the first night in New York. “Names like Davis were concerned that he was going to take their work. That’s how good he was.” America proved a fertile pasture for Hayes, but it was also his undoing as his bacchanalian lifestyle intensified: “Tubby would do anything. He was non-stop with everything, 24/7,” says Baxter. “He crammed as much as he could into his 38 years.”

Tubby played with the very best from Ella Fitzgerald, Duke Ellington, Charles Mingus and Roland Kirk to Henry Mancini and played on over 60 LPs, solo and with other artists. “But The Beatles, when then arrived on the scene, wiped the slate clean. There was no desire to hear jazz when they turned up,” adds Baxter. “This happened over night, so Tubby’s career went downhill at that point.” 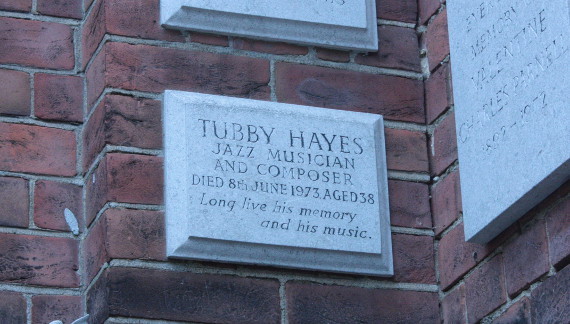 Tracking a life that burned bright like a Roman candle has taken some effort, but without it this chapter of British musical history would have remained overlooked, perhaps indefinitely. The documentary might help resurrect the forgotten oeuvre of My Hayes and makes clear that, for his art, he sacrificed himself.

Tubby died in 1973 and was cremated. His ashes were interred at the Golders Green Crematorium and it is there that a stone plaque sits on a high wall to mark the life of a player who took on the best in an age of greats so that, one day, he too would be remembered as one. After all, music, unlike its makers, never dies.

Tubby Hayes: A Man In A Hurry will be released in the autumn