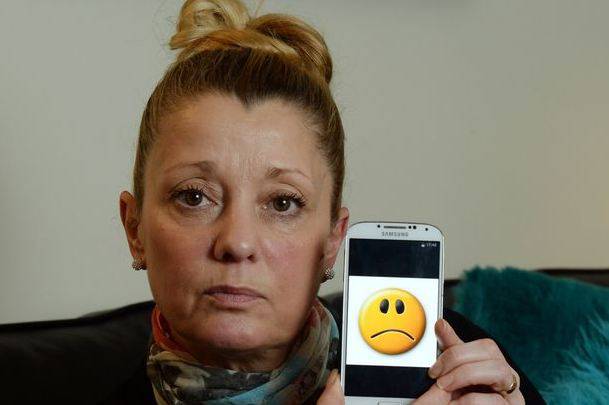 There’s an emoji to express every emotion.

In this instance, Paula Cochrane uses one to express her shock at being charged £1,200 to use the darn things.

The 48-year-old didn’t know the cartoon faces were billed as picture messages and costing her £1 a pop, report the Daily Record.

Paula said: ‘I am raging. I have never heard of this before and I’ve had a mobile phone for years.

‘Even the staff at my local EE shop were shocked when I told them. They knew nothing about it.’

Paula, of Airdrie, took an upgrade by EE to a £30.99-a-month, two-year contract in September.

MORE: An artist has painted incredible pictures of celebrities using nothing but emojis

The first bill in November amounted to £100.92, but she put it down to her using the phone more than usual.

But when she called EE to complain she was horrified when they said her December bill was £449.

MORE: You can now buy a smiling poo emoji shirt (but that doesn’t mean you should)

A spokesperson for EE said: ‘Ms Cochrane incurred a series of charges for emojis which were sent in the form of MMS messages and fall outside of her monthly tariff.

‘There are a number of factors which can affect whether customers are charged for sending an emoji.

‘In this case it was caused by the settings on her handset and so this is a manufacturer – rather than a network – issue.

‘We offered to add a credit to her account but this was refused.’

Paula is taking her case to the ombudsman and I’d be keen to hear from other readers who have had similar problems.

MORE: Blame social media: The heart emoji is declared the top word of 2014