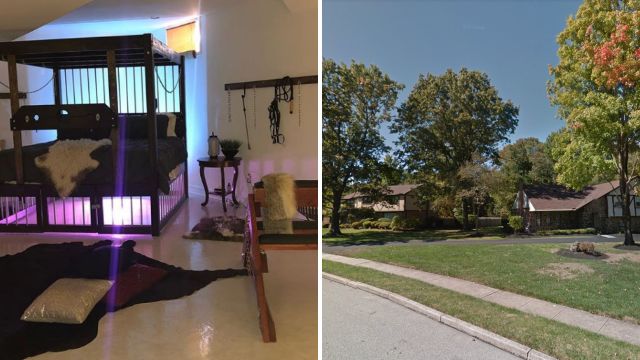 A prude suburban neighborhood is clearly uncomfortable with the discovery that one of their neighbors has a ‘sex oasis.’

The kinky Philadelphia, Pennsylvania home was recently put on the market and features three fireplaces, hardwood floors, and a fully-stocked sex dungeon.

‘I think they’re really angry!,’ said local realtor, Melissa Leonard, who is selling the home that she has dubbed ’50 Shades of Maple Glen.’

‘Like, “They’re whipping people sexually around in there!” I’m like, “Listen, it’s a lifestyle,”‘ Leonard told Slate.

When Slate conducted a phone interview with Leonard, she kept getting interrupted by irate neighbors and the conversation, which was documented, went like this:

‘Are you the real estate agent,’ said an unidentified male neighbor.

‘We’re very upset about this whole thing. We do not want something like this in our neighborhood. Take that off the internet. That’s disgusting. We don’t want that,’ the neighbor was heard saying.

‘Sir, if the owner wants those photos on the listing, that’s their choice!’ Leonard responded.

‘You’ve got to take them down! We live next door and we don’t want this!’ the neighbor protested.

‘You’re angry at me but you’re really angry at the owner. I’m trying to sell the house as fast as possible,’ Leonard said.

‘People are all over the neighborhood and they’re all saying they’re here to see the sex house!’ said the neighbor before the conversation ended.

Leonard said that featuring photos of the home’s basement has helped her reach people much more quickly.

The home’s listing on real estate website Redfin was viewed more than 500,000 times in the first 24 hours it was online – and it has since been viewed over 2 million more times.

Although neighbors are not happy now, Leonard said she believes they will ultimately be happy the home got so much exposure.

‘I think that people are gonna like that it went viral. It’s gonna bring more people to the house and it’s going to sell faster,’ she said.