Walking on the Beach Imitating Sand

Step inside London’s Hus Gallery and you become immersed in an imaginary, timeless and ethereal setting created by two young sculptors, Virgile Ittah and Kai Yoda. Immersed and integral too, since the viewer is seen by the artists as part of this mood piece.

Entitled “Walking on the Beach Imitating Sand”, it’s a personal expression of the struggle for national and cultural identity in a world in which the migration of people throughout the world has become a source of much current political debate.

Ittah was a finalist in last year’s Catlin Prize and is developing a growing reputation for sculpting in her trademark wax. Themes of cultural displacement, isolation and the search for identity have been recurrent themes in her work.

Ittah was born and raised in France of Jewish North African descent. Her father and grandmother were born in Morocco, and historically, that side of the family has moved through a variety of countries in the Mediterranean region.

Her artistic themes have been accentuated over the past two years since she met Kai Yoda, a sculptor born in Tokyo to a Japanese father and Swedish mother. Both artists share a mutual understanding not only of the benefits of their mixed ethnicity but also of the constant flux, a sense of cultural dislocation and insecurity. 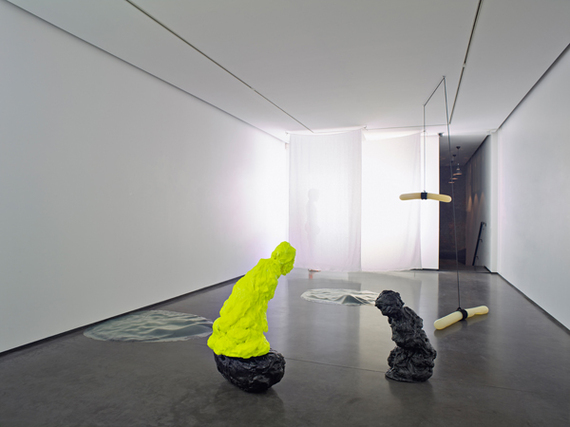 In the foreground (above), semi-figurative wax sculptures are hunched between small round “islands” built from coloured sand and silicone.

To the right, hangs a Yoda mobile comprising a balance-scale in which two similar-sized silicone cylinders suspended at unequal levels by a single piece of rope.

Beyond, behind a gauze-like linen curtain bathed in soft-light, stands a life-size neo-classical wax statue of a man.

“The concept is not only physical,” says Ittah. It can just be a feeling, and what we try to do through our work and installation is to re-create a feeling of homeland.” 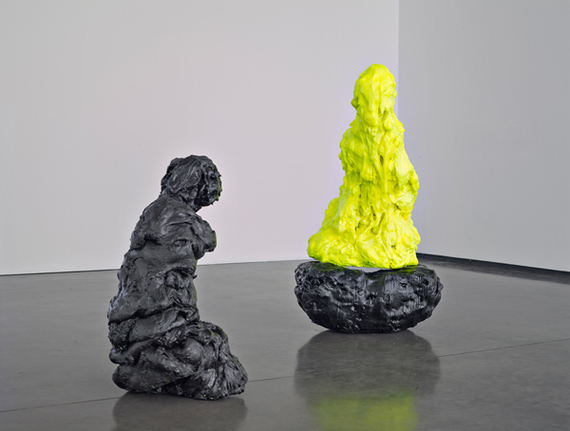 Though Ittah’s sculptures dominate, Yoda’s influence is strong. For example, Ittah’s iridescent wax “creatures” as she calls them (above) are sculpted in a free way, without the constant re-working that is her normal method. It’s another example of this “in-betweenness” theme and also in harmony with Japanese philosophy.

“Within their culture is a lot about control and the Japanese try to deal with nature as it is and not try to confront it or to fight it but just to deal with it. And I think it’s very Japanese to have a notion of acceptance and resilience.”

Yet though the setting seems to ooze comfort and peace, the biographical resonances of the artists’ sense of cultural limbo predominate. 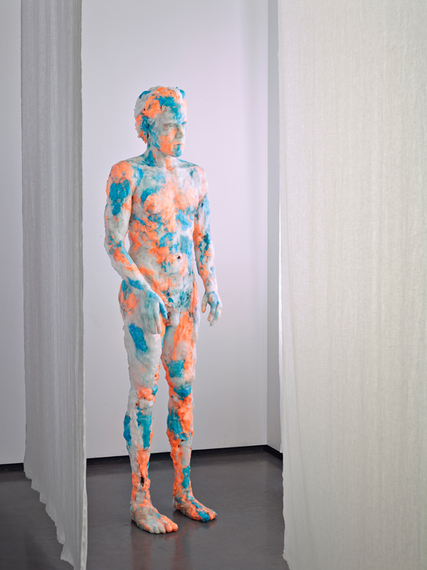 Ittah’s main statue (above) is not fixed to the ground but in a seeming state of temporality.

The bright colours are references to the radiation that leaked from the Fukushima nuclear reactor in 2011 that increased the fears of a Japanese nation already feeling insecure about nature because of the country’s propensity to earthquakes. The islands of Ittah and Yoda’s installation appear almost to be moveable, the linen curtain moves and flutters – symbolic instability is at the core.

One end of Yoda’s rope is broken – a symbol of the cutting of ties both emotional and physical. “It could be like a force for creation and a force for destruction too,” says Yoda. “A pushing and pulling thing.”

This also reflects their relationship. The couple admit to be being very different personalities; she expressive and taking the initiative, he passive and reactive. Yin and Yang. They even work on projects at different times of the day. Yoda has also experienced personal push and pull as a result of his mixed ethnicity from a young age.

In his early education in Japan at a western-run school, he was taught self-expression. When he entered the Japanese system, this was discouraged. His work as an interpreter too has highlighted differing attitudes between east and west.

One might imagine that the current troubles that have beset her native France in recent days, particularly among French Jewry, might increase any sense of insecurity Virgile Ittah might have. Yet she says no.

“This constant shifting is becoming a reality for many people around the globe. I feel the recent events in France is a violent reaction against this mixing of identities because they feel threatened. Yet for me the mixed identity is the future. I’m optimistic.”

Yet, to Kai Yoda, what insecurity they do have, has proved a force for creativity.

“It’s quite fascinating that both of us make so much work and have lived in so many places but we are so insecure,” says Yoda. “We always have this need to be making something more because of this insecurity and that is something very fascinating for me because now I have somebody next to me who is insecure as well and …we always want to be grounded but we are constantly failing.”

Walking on the Beach Imitating Sand is showing at the Hus Gallery, 10 Hanover Street, London W1S 1YQ until 21 February.

All images are used with the permission of the artists, the gallery and photographer Peter Mallett.