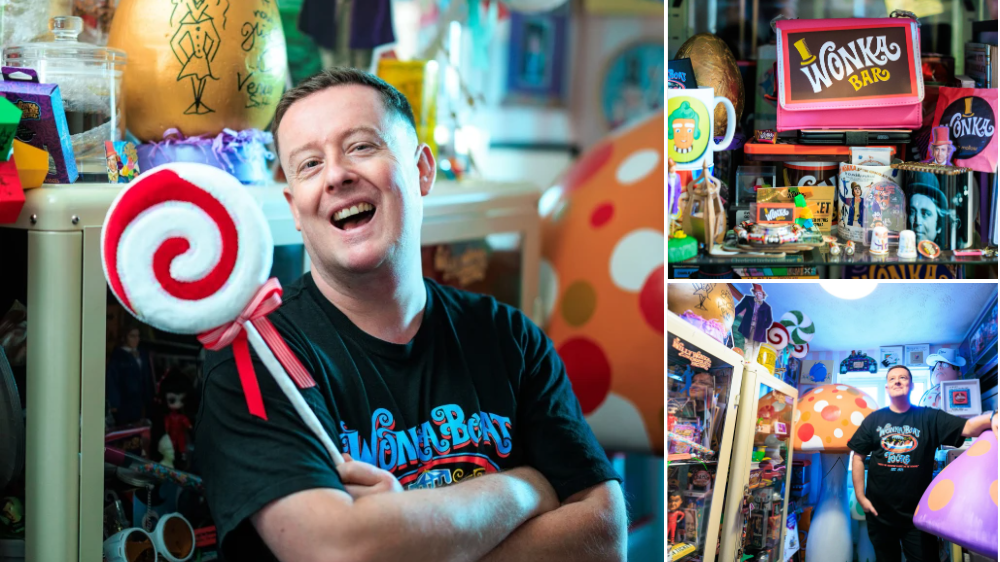 Meet the Willy Wonka fanatic who has Got a Golden Ticket, and much, much more.

Nick Franklin, 44, is believed to have the biggest private Willy Wonka collection in the world – and it comes in at a scrumdiddly­umptious £125,000.

The dedicated ‘Wonka Wing’ in his house boasts hundreds of items from the 1971 film and Johnny Depp’s 2005 remake – and he already has a few bits and pieces from the upcoming movie starring Timothée Chalamet, despite it not being released for another year.

On top of this, Nick says he counts Oompa-Loompa actors among his friends and is ‘on first name terms’ with many of the original cast.

After previously showing off his 17-year collection, he has faced ‘vile’ bullying from online trolls ‘all over the world’.

But the charity worker is determined to continue with his passion and has his sights set on a spot with the Guinness World Records.

‘Most of my collection is in a bedroom in my house that I call “the Wonka Wing’, Nick told Metro.co.uk. ‘We might have to expand and move to a bigger house soon.

‘The elusive things for me are getting in the Guinness Book of Records – I’m dying to get it verified – and getting another golden ticket from the original film.’

Nick’s Wonka obsession began when he was a child, with his mum telling him ‘stop buying bloody Wonka bars and take your niece to the zoo’.

But it was after the 2005 film that he got his first item; a ‘Dear People of the World’ poster.

He didn’t originally set out to build the largest collection, but over the years, he has gathered an impressive haul.

It includes Gene Wilder’s handprint and signature, a 2.5-metre candy cane from the 2005 chocolate river scene, a life-sized Augustus Gloop model and 100 different versions of Roald Dahl’s Charlie and the Chocolate Factory novel.

A Veruca Salt egg replica signed by actress Julie Dawn Cole also features, while Johnny Depp’s agent has sent over a golden ticket with a signed photo from the actor.

But the Cheshire lad counts his prize possession as a Wonka bar from the 1971 film, sold to him by Julie, who calls him ‘Cousin Nick’.

Saying Julie wanted someone who would ‘really treasure it’, Nick said: ‘She put a clause with it. She said if I sell it while she’s still alive, she’s going to hunt me down and chop my Willy Wonka off.’

He added: ‘I also already have stuff from the new film. We were visiting my husband’s family in Great Yarmouth and someone told me they were filming down the road so we raced down there.

‘I managed to get a few bits off this boat they were using to go into my collection. I got rivets, bolts and all kinds of stuff.

‘I’m very excited for the prequel. I’ve never seen any of Timothée’s work so I’ve got massive open eyes waiting for it.’

Nick, who runs a Facebook group with 3,000 Wonka fans, has found minor fame with his movie memorabilia.

‘Three people travelled over from America for Comic Con and recognized me. They were like, “can we see your Wonka room?”‘, he said.

‘I’d never done anything like that, but I know the excitement for them to hold a real one so I had a family from Massachusetts, a family from Boston, over. I feel like I should get a turnstile.’

While his dedication to Wonka appears to be unparalleled, Nick says there are still limits.

He said: ‘I’ve told the Roald Dahl Museum that 99% of the collection will go to them when I pop my clogs.

‘But my other half said my Wonka bar is gonna stay with him and he’ll use it to pay for my Wonka funeral. Can you imagine how disgusting that would be?

‘Everyone thought our wedding last year was going to be Wonka-themed. I was like, “if you really know me, know that I keep all that in the spare room, it’s a cool thing, but I wouldn’t want it spilling out to my wedding. So yeah, there’s a limit.’

A spokesperson for the Guinness World Records has encouraged Nick to apply to become a record holder.

Verification can cost thousands of pounds, and collections normally need to have at least one thousand items and to be on display for days.