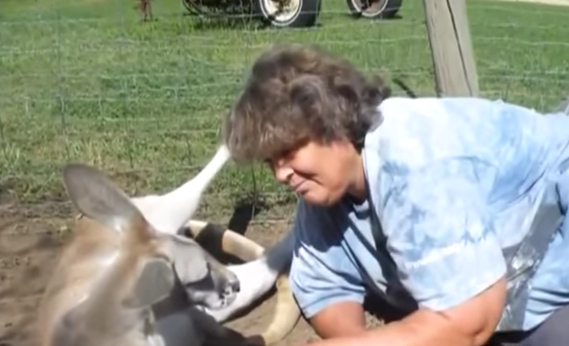 A woman was kicked out of McDonald’s after another customer complained about her therapy pet – a kangaroo.

Diana Moyer, from Wisconsin, brought the baby kangaroo into a branch of the fast food restaurant in Beaver Dam on Friday.

But Mrs Moyer and the joey were reported to police by a customer who said it was not appropriate or safe for a kangaroo to be there, despite claims that it was a service animal.

Mrs Moyer’s husband Larry later admitted that the kangaroo was not a service animal – which are protected under disability law – but a therapy pet – which aren’t protected.

He explained that his wife has cancer and the kangaroo provides her with affection and comfort.

Mr and Mrs Moyer keep five kangaroos as their home near Beaver Dam.

They said they often take Jimmy – the kangaroo in question – out in public.