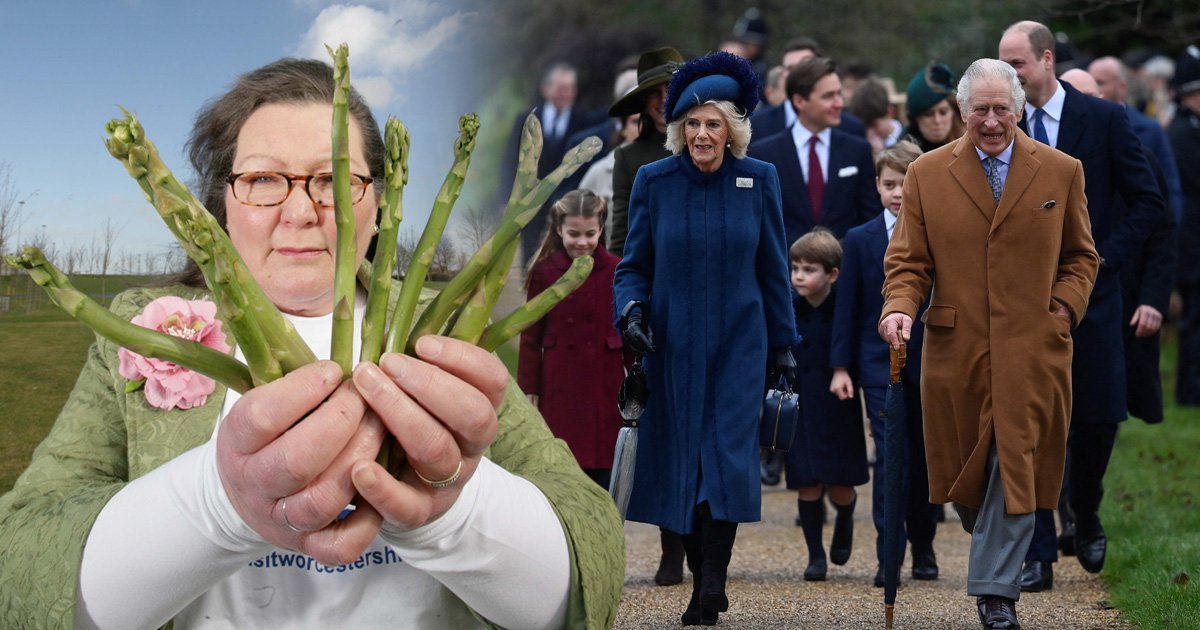 A fortune teller who predicts the future using asparagus has revealed her top forecasts for 2023.

Jemima Packington, 65, claims to be able to divine knowledge of the future by tossing spears into the air and interpreting how they land.

Over the years she has correctly predicted major events such as Brexit, as well as Harry and Meghan stepping down as senior members of the Royal Family.

Several of her predictions for 2022 – such as Croatia winning the World Cup and Boris Johnson clinging on as Prime Minister – had less success however.

This year she has predicted the Lionesses will continue on from their Euro 2022 win by bringing home the Women’s World Cup, and added that The Conservatives will hang onto government.

The Asparamancer has also said there will be a health scare for Princess Anne – which comes just a few months after she predicted the Queen’s death when she saw a broken crown in her spears.

She also said rationing may be considered due to food shortages, and more people will return to growing their own foods.


Last year she predicted Croatia would win the World Cup (they finished third) and that the Oscar for Best Film will go to ‘The Power of the Dog’ and Benedict Cumberbatch will be nominated for Best Actor.

Sadly neither were correct. She also said Keir Starmer wouldn’t stay on as leader of the Labour party.

In 2021, Jemima predicted Christmas celebrations would be a modest affair which was the case in many households as Omicron took hold.

In 2019, she correctly predicted cricket success for England, Big Brother returning to our screens and US romantic musical ‘A Star is Born’ winning an Oscar.

Before that she correctly foresaw Andy Murray winning Wimbledon, the Euro crisis and the credit crunch.

Her other predictions for this year include Gareth Southgate getting an award in the King’s New Years honours, and that there will be more Royal births on the cards.

Jemima, from Bath, began making predictions aged eight and says she inherited the gift from her elderly aunt who used to read tea leaves.

She said: ‘My technique has not changed and I still cast the asparagus spears and interpret the patterns in them.

‘Seeing the patterns for me is instantaneous, possibly that is because I’ve had years of practice.

1. Despite all the bad press, Boris Johnson will continue as Prime Minister.

2. Covid and all its variants will be with us forever but everyone will learn to adapt and not let it get the better of us.

3. A brand new way of living will become the norm – working from home etc. but people will no longer accept shoddy services hiding behind the guise of the pandemic.

4. Entertainment and sports venues will find ways to progress while keeping everyone safe.

5. More sadness for the Royal Family; scandals and worse.

6. We will be shocked at the news of the unexpected demise of showbiz legends.

7. A review of the Nation’s Educational Standards will be carried out to make sure no child is left behind. More emphasis on vocational training will be introduced.

8. A return to times when foreign travel was an exotic luxury will be experienced. It will no longer be a regular occurrence and travel prices will reflect this.

9. The economy will rally and it will become a beacon of achievement amongst those countries unable to get to grips with their own economies.

10. Tense times will continue on the international front but conflicts will be avoided.

11. Adaptability will become the by-word in the leisure and service industries; they will embrace the change in people’s habits and will survive stronger than ever.

12. Sir Keir Starmer will not continue as leader of the Labour Party in a shock twist.

13. Sadly climate change will continue and fewer countries will be active in its reversal.

14. Recycling and upcycling will be the new fashion. There will be less waste of any sort. Barter will become a new trend.

15. Agriculture will progress well, and Vale of Evesham asparagus will continue to be recognised as the world’s best.

16. Croatia will win the World Cup in 2022 but the competition will still be beset by controversy.

17. Manchester City won’t win the Premier League, but watch out for Manchester United.

18. West Indies will be the surprise winners of the Cricket World Cup in Australia.

19. England’s Women’s Rugby team will have terrific success at their World Cup in New Zealand.

20. The Oscar for Best Film will go to ‘The Power of the Dog’ and Benedict Cumberbatch will be nominated for Best Actor.

‘Occasionally I get one slightly off, where I haven’t quite read it correctly, but I’m never far off.

‘I predicted Boris Johnson would become Prime Minister about four years before he did and everyone laughed their socks off.’

To make her predictions, Jemima uses fresh Worcestershire asparagus grown in the Vale of Evesham – the UK’s main supplier of the vegetable.

She picks a handful of tips, tosses them into the air and ‘reads’ the shapes they form when they land.

Do you have any whacky predictions for 2023? Or have you got any unique ways that you use to help predict the future?

Do you agree with Jemima’s predictions, let us know your thoughts!

If so please contact our reporter Liam at liam.coleman@metro.co.uk