Sara Shamma is an internationally acclaimed portrait painter. Among her many awards are the BP Portrait Award 2004 and the Waterhouse Natural History Art Prize South Australia 2008. She exhibited at the Florence Biennale in 2013.

Shamma hails from Syria, and the seemingly interminable slaughter taking place in her homeland as the civil war rages on, has inspired a body of work in a new exhibition at London’s StolenSpace gallery entitled World Civil War Portraits. 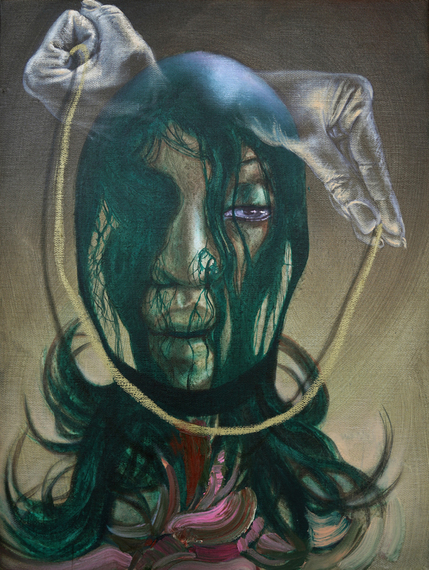 The portraits depicting the human tragedy of the war are both shocking and haunting. Incognito 3 (above) is typical both of the atmosphere of the subject matter and the style of the artist. The deathlike face with its expressionless eye and matted hair is painted in vivid broad brushstrokes in contrast to the transparent lightness of touch depicting the hands above the head.

These contrasting layers create not only a sense of depth accentuated by the sinister line of the rope and its shadow, but also add a dimension. There’s a play between realism and the symbolic, the human condition perhaps, which is contradictory in itself by way of the clenched fist and the sensitive fingertip touch.

Fear and anxiety for herself and her young family caused Sara Shamma to move from her home in Damascus to exile in Lebanon. A car bomb exploding near her home was the last straw. Her husband has stayed on in Syria where he runs a shipping company but he visits her and the children in Beirut each weekend.

The paintings are in no way journalistic and Shamma doesn’t take sides in a war in which dozens of factions are now involved. That many of these, most notably ISIS, have extended the conflict through much of the Middle East, explains the “World” in the exhibition’s title. “I believe taking sides is the fuel of war. I only care about the dead people”, she says adamantly. 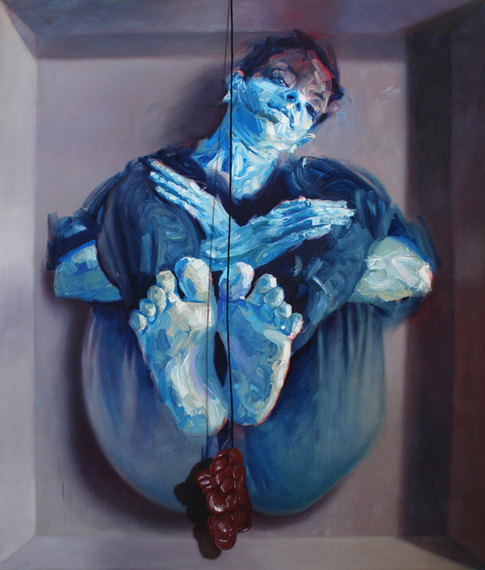 In a Box (above), was inspired by mass graves. It’s a dead body but one eye is alive. “I make them alive in order to stare at the viewer,” she says. Hanging in the foreground is a somewhat gory addition, internal body organs. This is a recurrent theme in Shamma’s work. Kidneys, livers and brains appear not only as a shocking reminder of the horrors of war but also of something more positive. “I’m very interested in the workings of the human body. It represents life for me in all its aspects.” 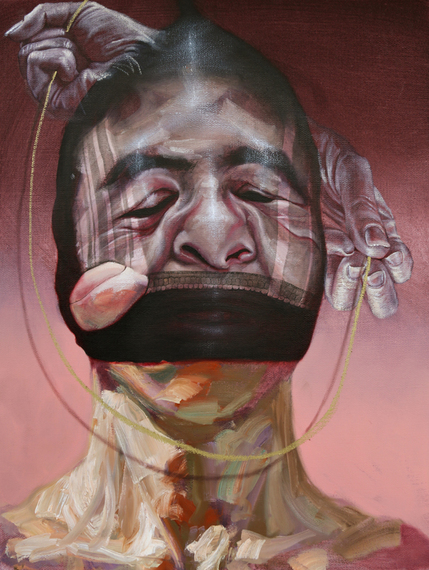 The hands and the rope motif recurs in Incognito 1 (above). This time the subject’s face is being placed in a nylon sock – an instrument of torture. It also enables the artist to depict facial distortion, a new kind of expression.

Shamma’s fascination with the human body and its workings preceded her experience of war. She studied human anatomy, mainly in mortuaries. “I love the symbolism of death because death gives life its meaning,” she explains. ” Life loses its meaning without its extinction.”

She puts this anatomical fascination to good use in Self Portrait (above). She gently caresses a skull in sympathy for those killed in this and all wars. The deflated ballon – fun times are over – provides an additional focus in the foreground while the ghastly chimera of war lurks behind.

“The line makes you feel the distance between the line and the painting to give it depth. At the same time, this kind of line removes the whole painting in a way. It deletes it in a way. The line sometimes makes me forget all the painting, makes it fade away.”

With an estimated 200,000 Syrians dead, and with no obvious end in sight, the casualty list is increasingly in danger of becoming just another statistic. For that reason, Sara Shamma aims to penetrate the viewer’s subconscious. “I will not leave them dead, I want to bring them to life, I want them to tell their stories, to defend their differences, to convince everybody that they deserved to be alive.”

All images are used with the permission of the artist.