So far in the competition, the four-piece sister act have wowed the judges and viewers at home with their energetic performances, which have mixed elaborate dance routines with impressively tight harmonies.

However, performing for Cheryl Fernandez-Versini and guest judge Jess Glynne at Judges’ Houses, the girls showed a more vulnerable side, performing the Rihanna ballad, ‘Love The Way You Lie, pt. II’. 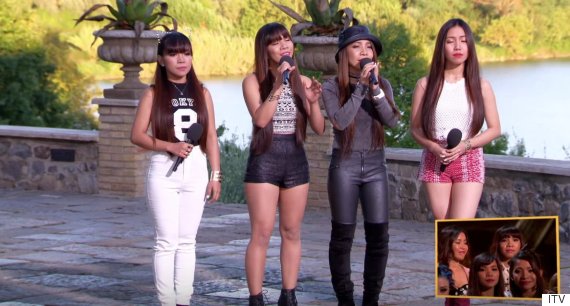 And while the decision to stray from what we’ve seen them do so far might have been a risk at this stage in the competition, it obviously paid off, as Cheryl decided to give them a spot in the live shows during Saturday night’s show.

Watch their performance in full in the video above.

4th Impact were one of three groups Cheryl chose to put through to live shows, alongside Alien Uncovered and Reggie ‘n’ Bollie, meaning it was the end of the road for Melody Stone, New Kings Order and BEKLN Mile.

Explaining her decision, Cheryl told Olly Murs and Caroline Flack: “We’ve got two totally different girl groups, which I’m so excited about, we’re going to girl power it up. And then we’ve got a group who are going to bring so much excitement and fun.

“There’s only so much you can do with a choir. But honestly, the people who have just left the stage are just as talented as the ones still on stage.”

This year’s ‘X Factor’ live shows kick off on Saturday, 31 October, on ITV.